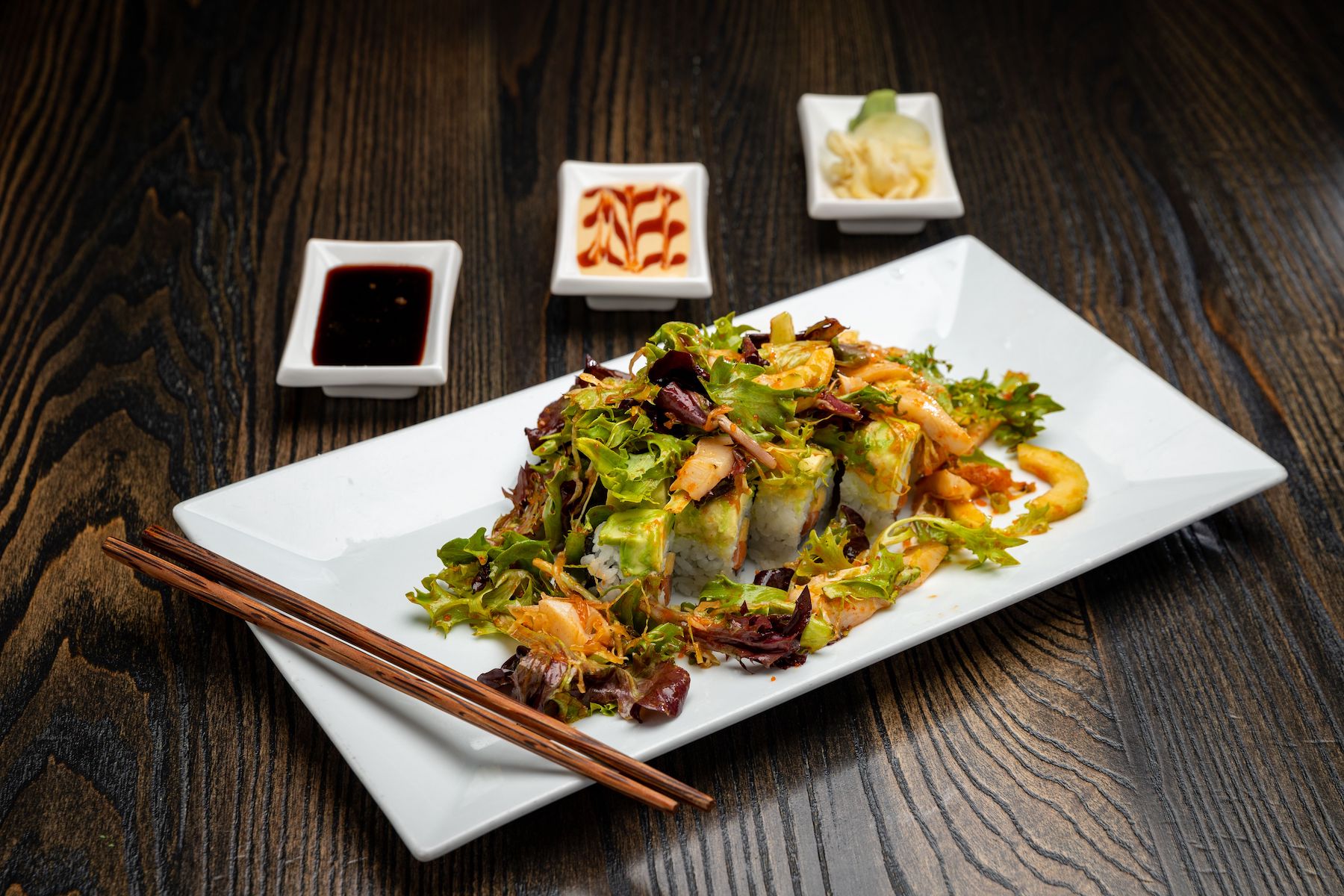 Whiskey Neat and Quarterdeck Are a Match Made in Heaven!

Our first impact upon arriving at Whiskey Neat and Quarterdeck was WOW! To your left an artistic, dark, metal Whiskey arsenal waiting for you to taste. To your right, an seafarers menagerie with an all American menu that stretches beyond seafood. We made our way to the left into Whiskey Neat, drawn in by the sirens of heavy metal! 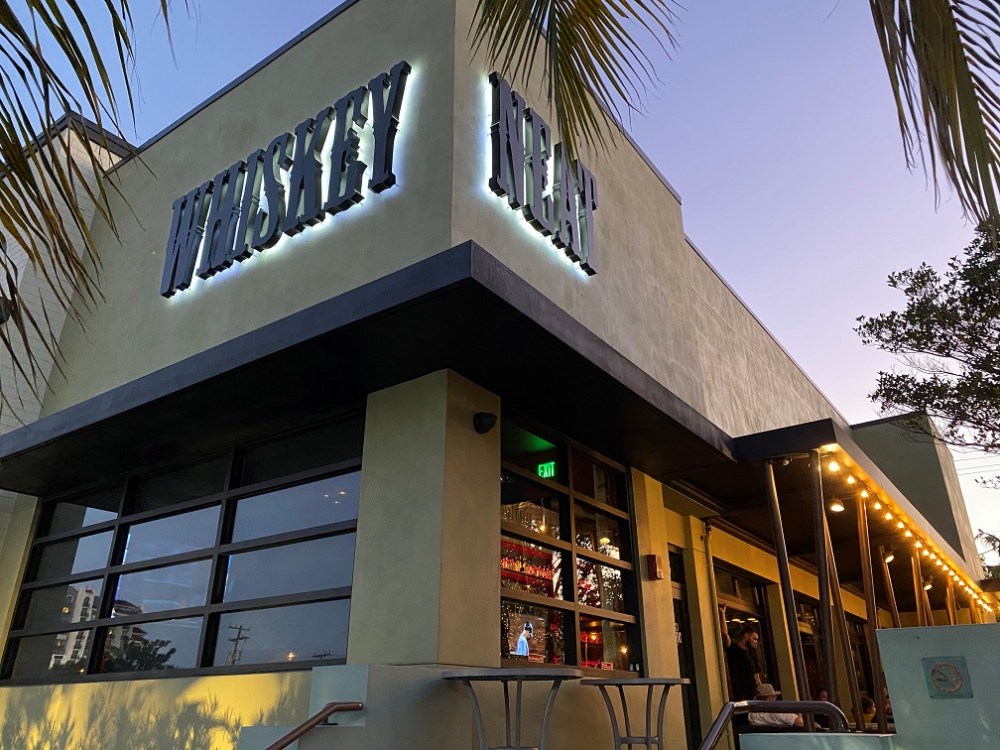 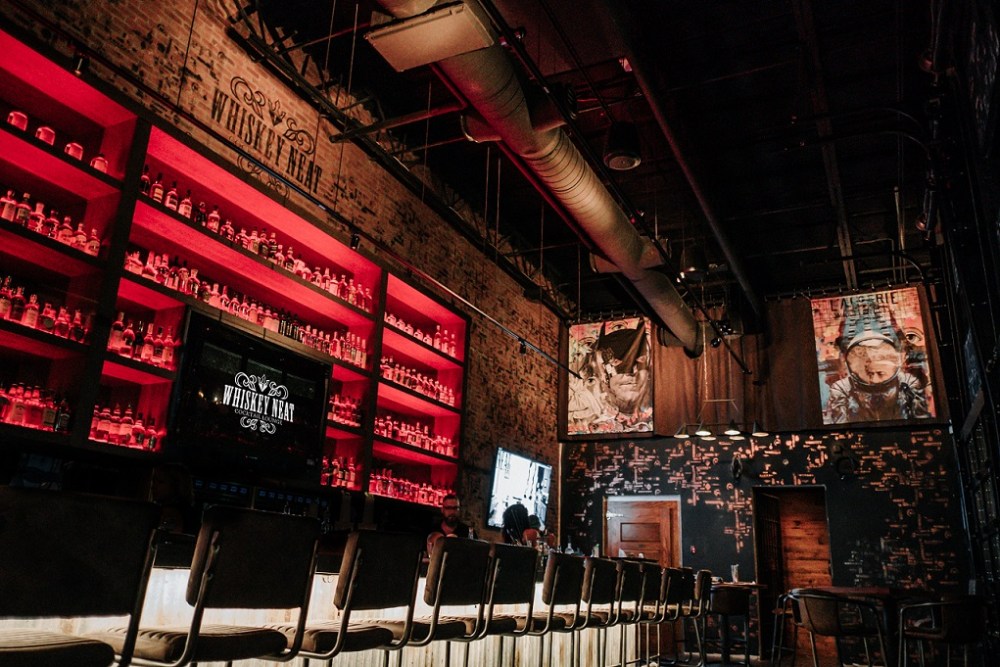 Whiskey Neat offers an uniquely dark and intimate space, but with an artistic twist. The perfect environment to give your full attention to the smells, tastes, and history of Whiskies that await you. 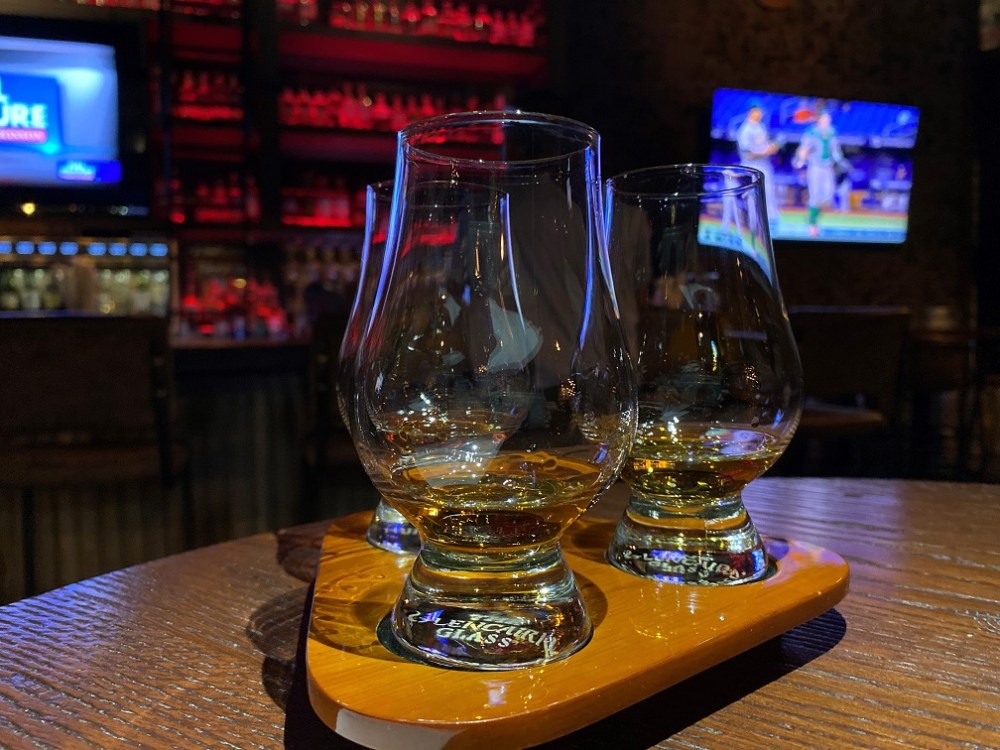 There are 4 flights to choose from at Whiskey Neat, we picked the Rye Whiskey and Single Malts. Each flight offers 3 different selections  0.5 oz each. Starting with the Ryes, Basil Hayden was smooth and spicy. Highwest sharp and fruity. Knobb Creek was mild sweet, almost buttery. For someone who doesn’t know much about American whiskeys, this was an excellent to see the range of flavor.

Next we moved onto the Single Malt Scotchs flight, which is a little more up our alley.  Dalmore had that unmistakable Scotch flavor, bitter but smooth. Balvenie was surprisingly sweet, almost peachy with a bite at the end. Glenmorangie was a full-bodied spicy experience.

Something that we were not expecting here was for our Bartender Ben to guide us through the tasting of each flight. Ben gave us interesting tidbits about each brand and its history behind the spirits.  As we finished our 2nd flight, Ben offered us an off the menu flight, which was a compilation owing to his personal favorites. Ben’s Flight consisted of Blackened, Horse Soldier, and Uncle Nearest, each with their own unique story just as interesting as they tasted.

First we tried Blackened, a fruity rye with notes of apricot. By and large most popularly known as the whisky of the rock band Metallica and by master distiller Dave Pickerell. The whiskey, while barreled, gets blasted with the vibrations of heavy metal music that boldly shows up in its taste.

Next up was Horse Soldier, who’s story was near and dear to our heart, being that Stephanie is OIF veteran. Horse Soldier Bourbon was created by a group of 911 veterans. Each bottle of Horse Soldier is formed in molds of steel recovered from ground zero of the World Trade Center in New York City. An amazing story with an sweet caramel spicy taste.

Last we tried Uncle Nearest, the Whiskey of a former slave with given name of Nathan Green. Nathan Green is a legend in the Tennessee whiskey world, and he perfected the process of filtering and aging Tennessee Whiskey. Overall, Uncle Nearest had a unique citrus flavor, with a sweet smooth balance.

After sipping the neats, and confident we were at the right spot for a craft cocktail, Ben suggested we try 2 of their specialty cocktails. First was the Black Eyed Rye, made with Sagamore Spirit Rye “Private Barrel Pick”, Lime Juice, Blackberries, Mint, Simple Syrup, Fever Tree Ginger Beer. This was one of the best Whisky cocktails I have ever tried. It has all the things I love, citrus, not too sweet, bubbly, aromatics from the mint with a touch of spice from the ginger beer, and the right amount of spirit for a perfect balance of flavors. 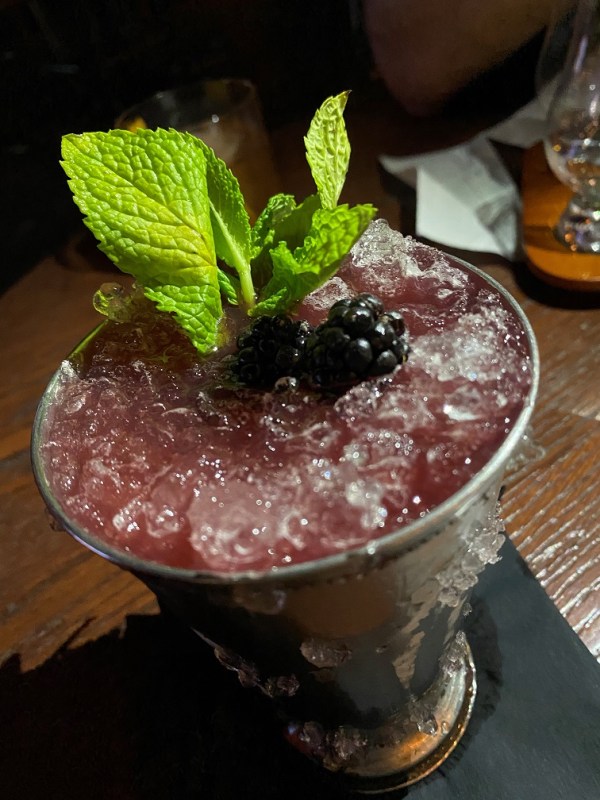 The second was the Jack D. Armstrong, made with Old Forester 100 Rye, Bitter Truth Chocolate Bitters, Brown Sugar, Black Cherry, and smoked. This was a literal cherry on top of flavor, like a smokey old fashion due to the deep flavor from the mix of black cherry and chocolate bitters. 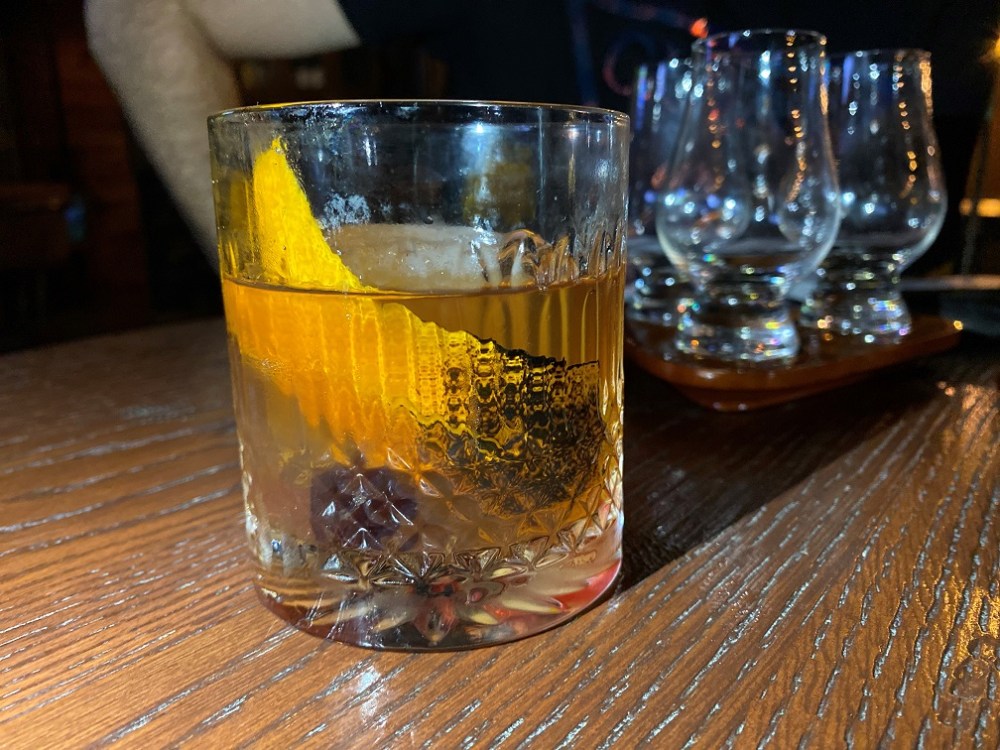 Jack D Armstrong
Both of these cocktails were a tasty shift before we moved on to dinner. But not before a few final saucy photos. 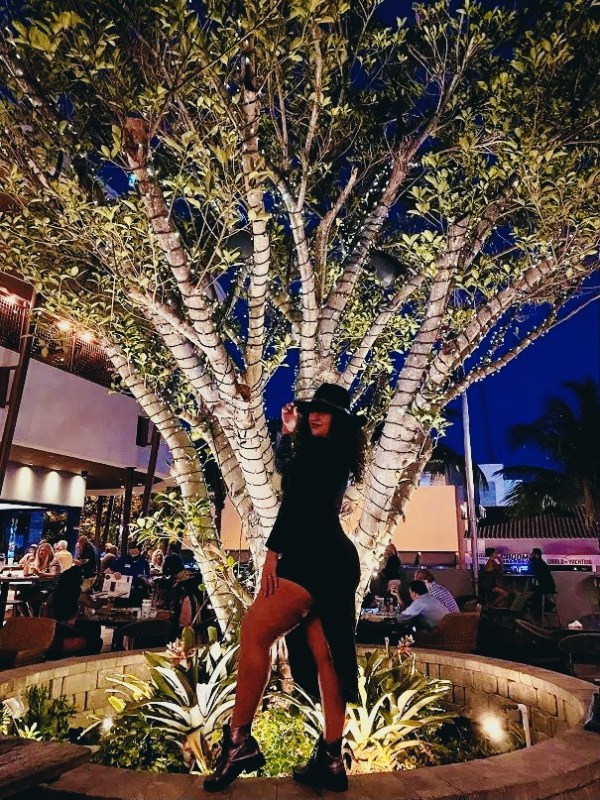 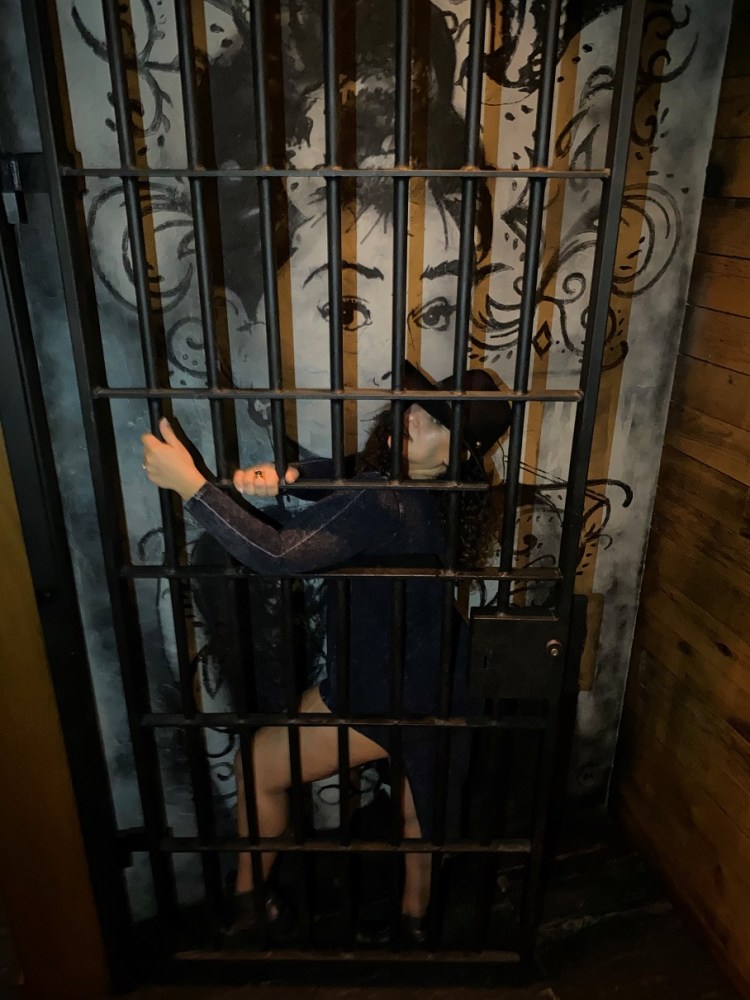 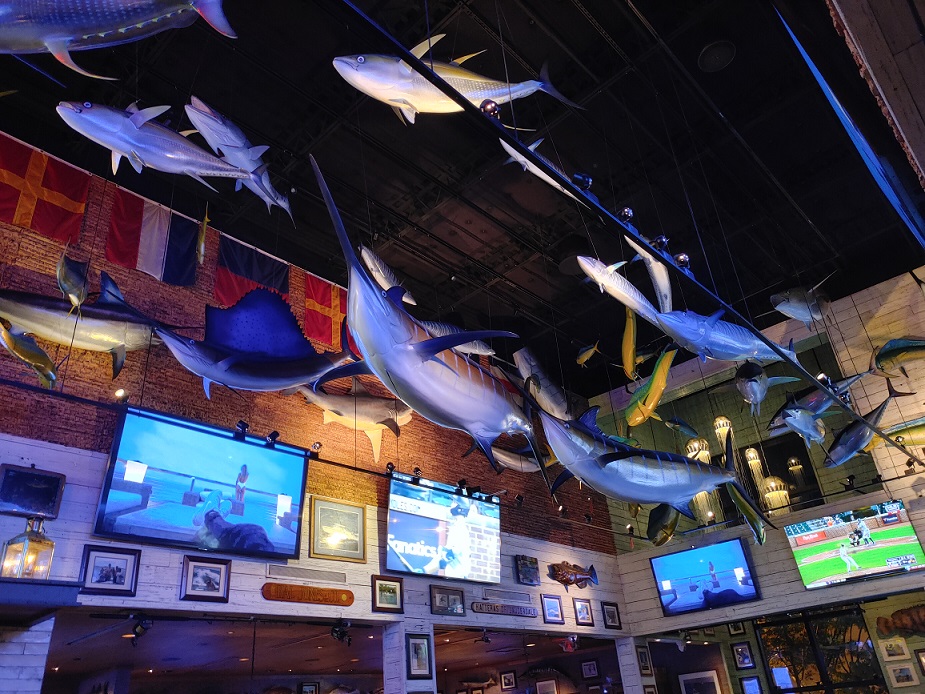 All Whiskey’ d up and ready to eat, we made our way back into the garden to prepare for our Quarterdeck experience. We had our choice of tables, including one with a fire pit! We decided to sit next to the tree of life and jump into the menu that Quarterdeck has to offer.

Of the full range of appetizers available, we decided to start with 2 opposing flavors. Fried Calamari with pepperoncini & parmesan cheese, tossed in Hot sauce. Not gonna lie, we were very skeptical about this, but we were surprisingly shocked with the flavor combination as a a result. 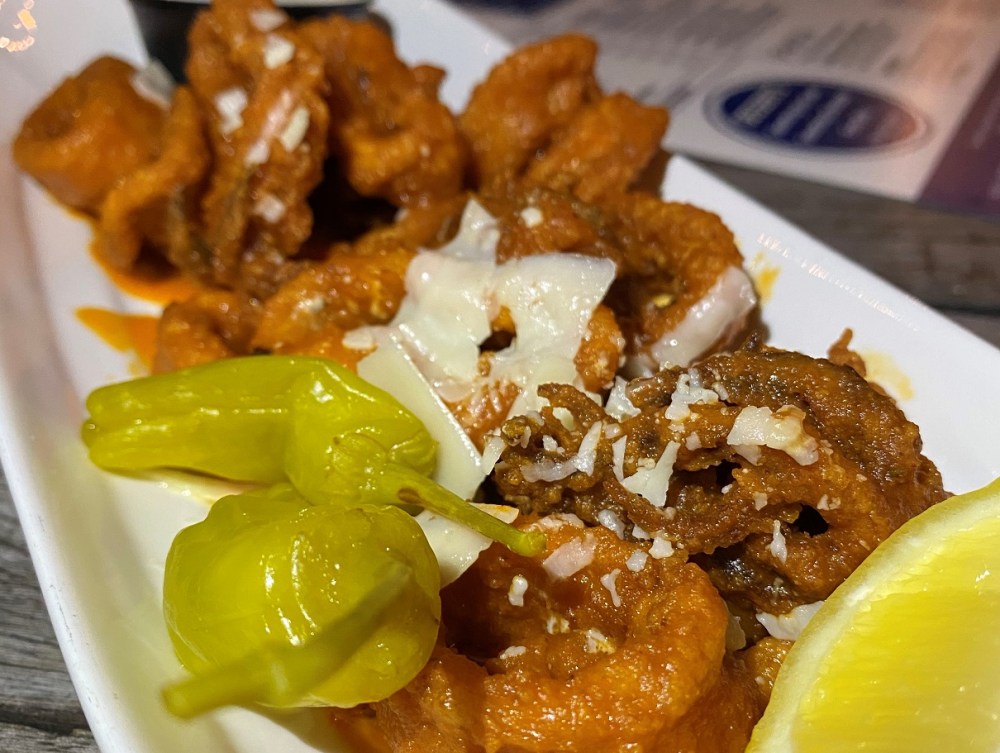 We followed up with the Smoked Mahi Dip, With tortilla chips, sliced carrots and cucumbers. The fish was so light and fluffy, like a smokey little cloud. This paired significantly well after the spicy hot sauce from Calamari. 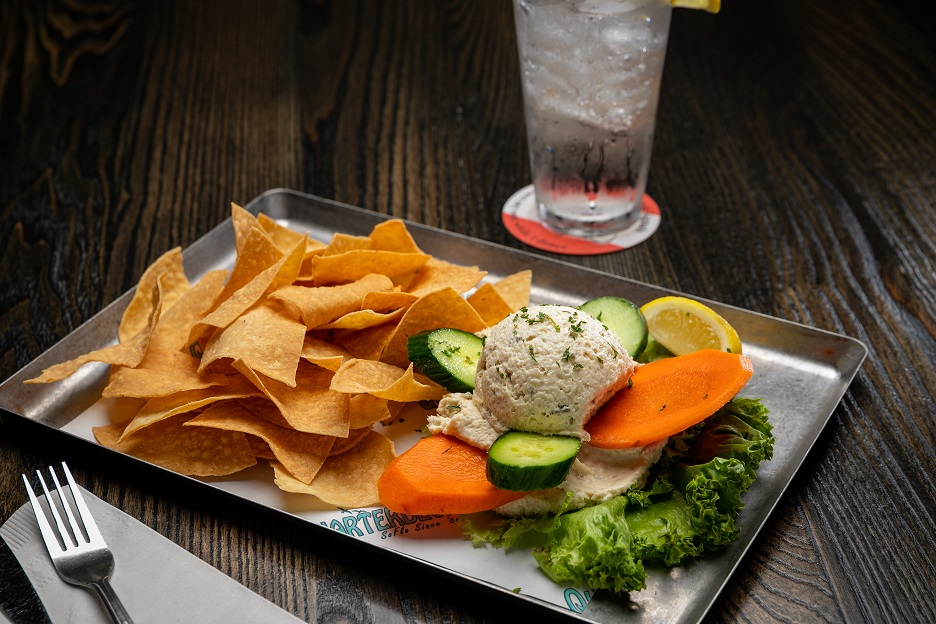 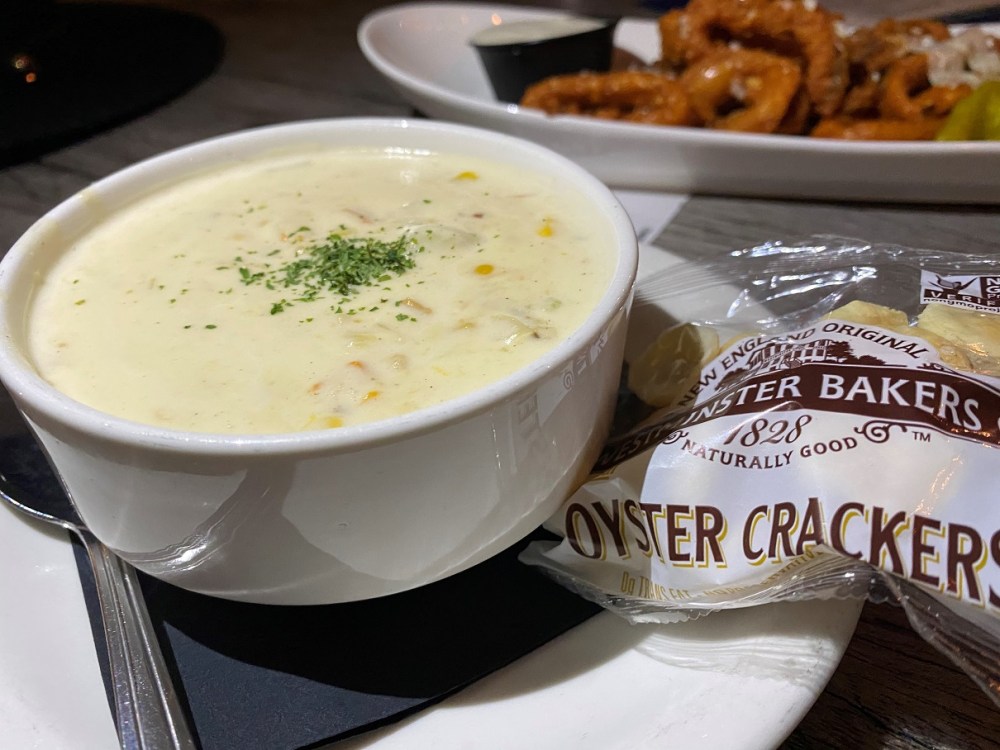 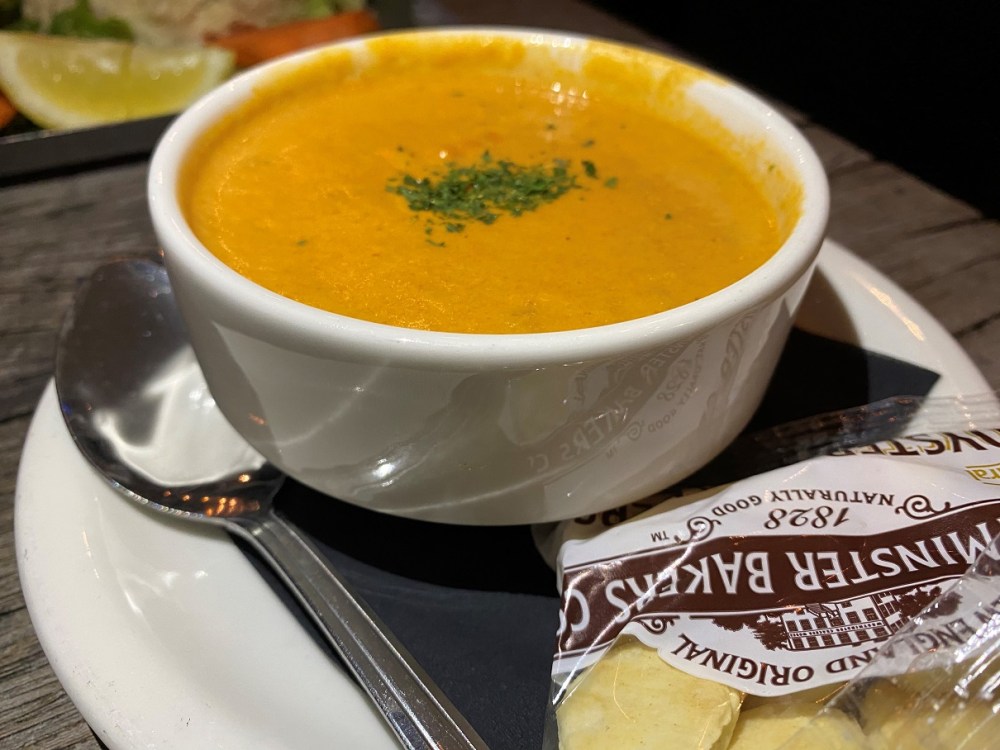 We were both happy with the soups we ordered. Not only are these are favorites, but they turned out to taste amazing. The Stone Crab Chowder had big meaty chunks of crab meat in a bath of savory potato chowder. The Lobster Bisque on the other hand was rich and creamy, with a hint of sweetness that lobster is known for.

Now we were ready to really eat! We went with the highly recommended Caribbean Jerk Chicken Sandwich, stuffed with marinated jerk chicken breast, pepper jack cheese, mixed greens, and pico de gallo on a lightly toasted ciabatta roll. The chicken was so tender and juicy , with that spicy from the jerk spices, delightful. 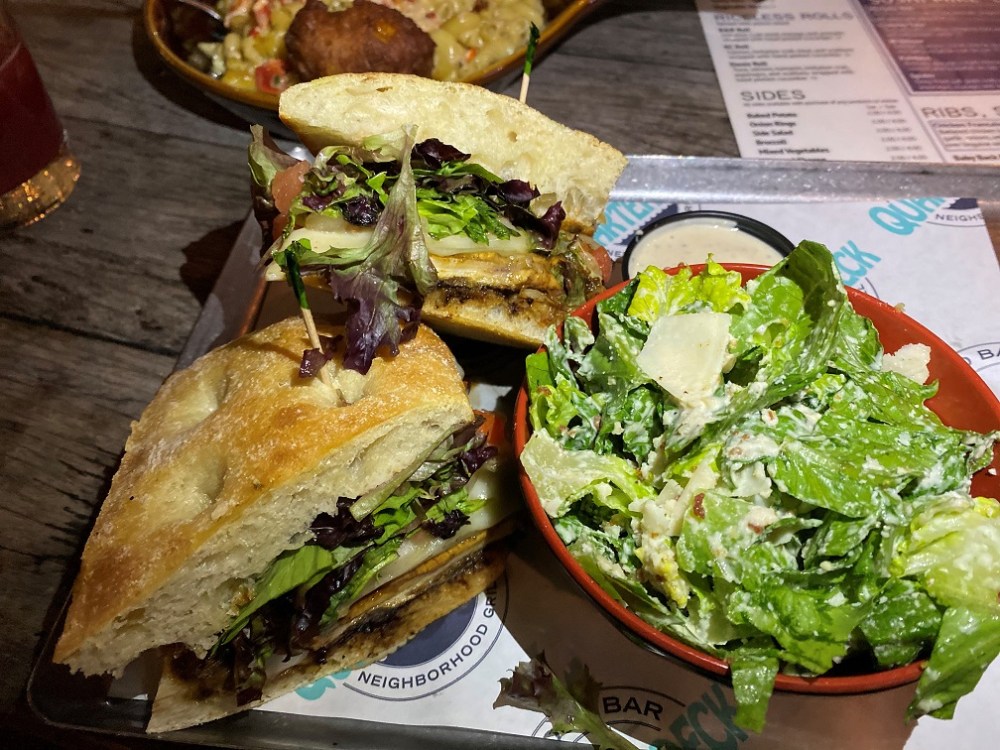 We missed out on the Sushi , so from the seafood section of the menu we tried the Lobster Mac & Cheese, with white cheddar cheese, tarragon and truffle oil, served with two Lobster Fritters. Sweet, creamy. cheesy goodness. 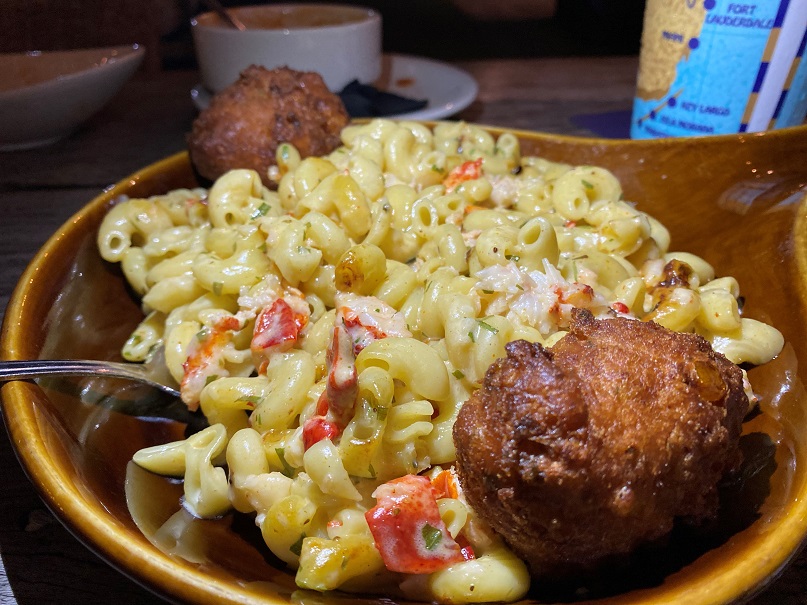 Jambalaya Pasta, made with shrimp, chicken, andouille sausage & kale, green and red peppers, red onion, Cajun seasoning, fresh parsley over linguine. The special fried rice of pasta dishes, with a gourmet entourage of protein in this dish. In fact, the kale and red onion provided a truly distinct line in between each of the flavors. 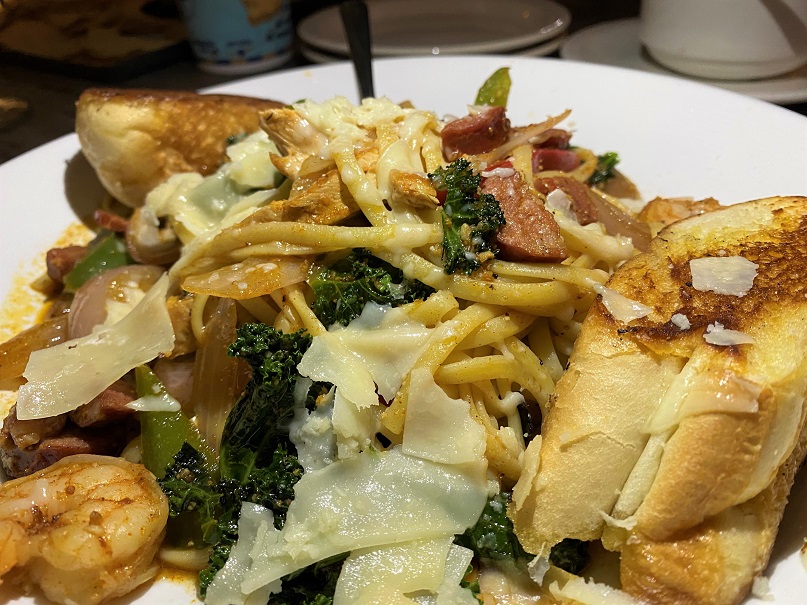 Half Rack of Baby Back Ribs with Caesar Salad. Meat sliding right off the bone, peppery sweet sauce with a tangy edge. 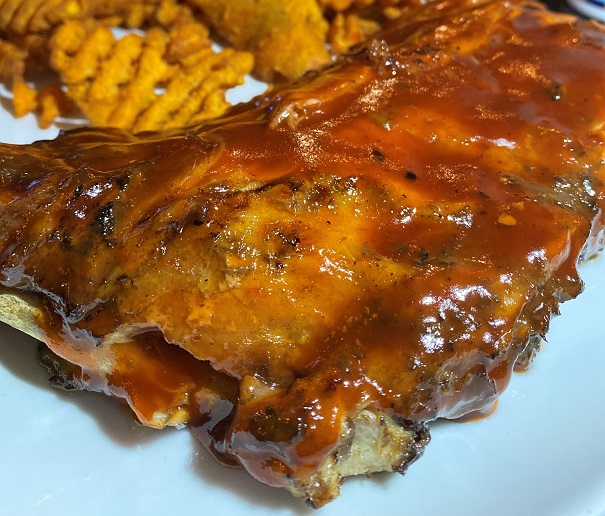 At this point we were too full to even look at the desserts. Very few details are disclosed of what they offer, its either Something Key Lime, or Something Chocolate. You will need to ask your server for details when you come.

In order to get our night cap in, we decided to go with 2 of their most recommended specialty cocktails to the end the night. First was The Michelle, made with Tito’s Handmade Vodka, St. Germain Edlerflower Liqueur, and Fresh Lime Juice, Topped with Soda Water and Fresh Berries. Not only a cleansing bubbly mouth feel, but also a light tang from the lime juice. 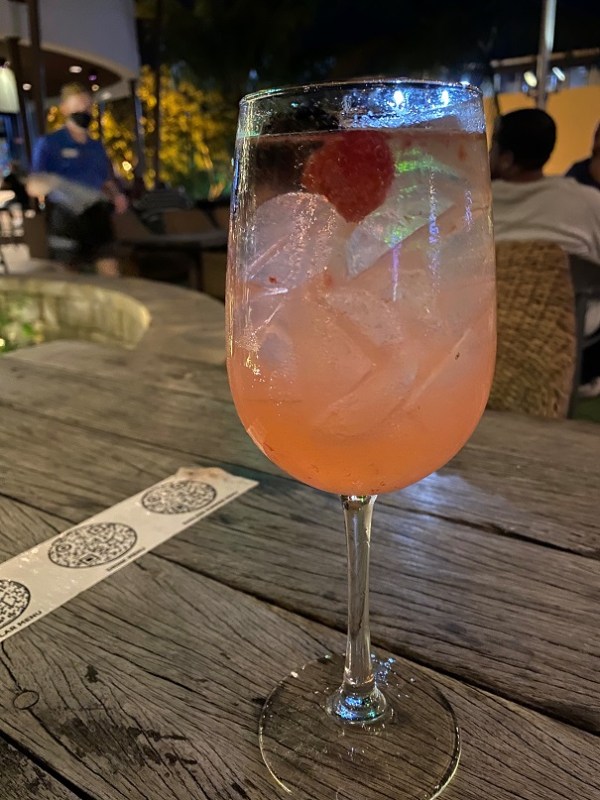 Next was the Lilly Bell, with Jack Daniel’s Tennessee Whisky, fresh lemon juice, muddle mint and blackberries, and a dash of simple syrup, served over crushed ice. I took my hat off to this one, Lilly Bell provided that end of night fruity yet whisky warm flavor to end the night. 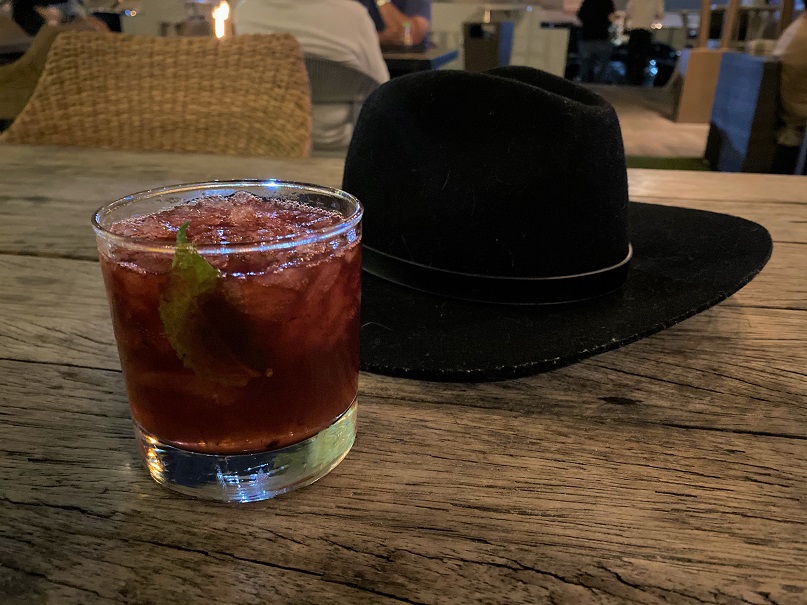